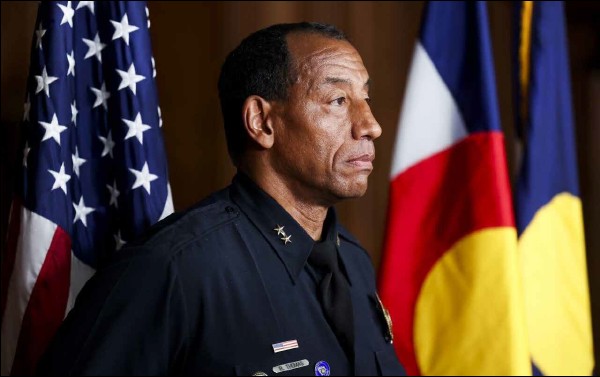 Ron Thomas was sworn in as Denver’s police chief Oct. 18. He spoke at a news conference on Sept. 1 announcing his selection by Mayor Michael Hancock to lead the Police Department.

One of the most vivid memories new Denver Police Chief Ron Thomas recalls from his 33year career in the department about the effect of police work on everyday people doesn’t come from a big drug bust or high-profile homicide case.

It’s the story of a stolen puppy. Thomas was assigned the mid-1990s case, he assumed, as a throwaway — easily passed off on him as a new detective in training. Someone had stolen a German shepherd puppy from a woman’s new litter under the guise of wanting to look at them to buy one. It’s the type of low-level case that might get filed away in a drawer and not seriously investigated.

But Thomas found a lead when he

learned the woman had a phone number saved on her caller ID, which took him to a family with three children. Around the time Thomas figured out which sibling was likely responsible for the puppy-snatching and asked the suspect to come in to talk again, Thomas got a call from the woman, thanking him. The missing puppy had suddenly appeared in her yard.

“I’ve been involved in a lot of high-profile investigations where we’ve recovered pounds and pounds of drugs and brought violent criminals to justice, but probably the one that sticks in my mind most is really that one,” said Thomas, now 56. “Just being able to get that puppy returned to the owner and how happy she seemed to be over the phone at seeing that dog run across her backyard.”

It’s these moments from his career that made a difference in people’s everyday lives that get the plainspoken, self-described man of few words talking.

Thomas took his oath as Denver’s new police chief Oct. 18, after the sudden retirement of former Chief Paul Pazen at the end of summer.

Thomas stepped into the role after four years as the department’s patrol division chief. Before that, he led the department’s Internal Affairs Bureau and then served stints as the commander of patrol Districts Two and Five.

“I think because he has worked in so many different assignments, and he has had the ability to work with many of the men and women of the Denver Police Department, people look as at him as somebody that has the ability to lead this department and look at him as a natural successor to Chief Pazen,” said Sgt. Tyson Worrell, president of the Denver Police Protective Association, the department’s collective bargaining organization.

Thomas frequently spoke to reporters at news conferences on the scene of violent incidents as the department’s chief of patrol — a position he held from 2018 until now. But one of the first comments he made after his appointment as chief by Mayor Michael Hancock suggested he would project a different image than his predecessor as the public face of the department.

Where Pazen frequently made public statements condemning as too lenient state policies regarding pretrial release and supervision practices in the case of people who commit violent crimes, Thomas said he would rather not dwell on things he can’t control.

“I find little value in expending energy on things that I can’t control. What I can control are the men and women that are out there on the street answering calls every day.”

When Thomas talks about an incident during a graveyard shift in 1990 when he kicked in the window of a truck engulfed in flames to pull out two men who lay unresponsive in the front, he remembers it with the dry, matter-of-fact perspective of someone who doesn’t have a self-aggrandizing view of his work.

“My next thought was, ‘ I just broke the window of this car; I better call my sergeant.’ And he kind of looked at me and he said, ‘I think you just saved those two people’s lives’,” Thomas said with a wry chuckle, without a hint of the formal jargon police use when they’re writing a report or giving a statement at a press conference.

He received a lifesaving award for that night, and again in 2003 when he rescued the unconscious occupant of a sinking car that had crashed into the Platte River. He also received a Distinguished Service Cross for that second incident

Those who know Thomas say he’s a man who is seen more than heard. But though he’s not one for small talk, they say his visibility has been genuine.

“We can also interpret that as he’s a good listener. Just because he’s not talking doesn’t mean that he’s not listening to what people are saying and addressing those needs and those concerns as they come in,” Worrell said.

Julia Richman, chair of Denver’s Citizen Oversight Board, said she’s optimistic about Thomas’ public statements that he’s committed to having the police department reflect what residents expect from it. The board oversees the effectiveness of the Office of the Inde

Thomas, a Black man, uses the words “lived experiences” frequently when he talks about the empathy he says officers need to have for how policing affects marginalized people. But some are scrutinizing how Thomas will live up to that principle with the culture fostered within the department under his leadership. The department faces allegations of a culture of harassment and discrimination in a federal complaint filed by Sgt. Carla Havard earlier this year with the Equal Employment Opportunity Commission.

Lisa Calderón, a candidate in Denver’s 2023 mayoral election and a longtime advocate for law enforcement reform in the city, criticized Thomas at a community forum Thursday night for making only vague commitments that he won’t tolerate sexism in the department.

“This is not a new issue. It’s been going on for years and years and years,” she said. “So the fact that just to say ‘sexism will not be tolerated’ doesn’t tell us a plan about that; doesn’t acknowledge the problem, especially for women of color in the department.”

Current and former officers declined to talk with The Denver Gazette about whether they believe Thomas has had a role in the culture alleged by Havard’s complaint.

When police did not intervene in the vandalism of a memorial to fallen officers in February 2015 during a protest against police violence — only stepping in to make arrests later — Thomas wrote a letter on behalf of the Black Police Officer’s Organization. As its then-executive secretary, Thomas’ letter defended how officers handled the incident on the orders of then- Chief Robert White. He praised White and other top leadership “for having the courage to show great restraint when monitored protest activity devolves from peaceful and legal demonstration to lawlessness.”

“It’s a refreshing reminder for me to think back to that. At least this is a man who has the consciousness in these periods, or has displayed it in the past, to be willing to support a handsoff approach,” said Alexander Landau, a longtime community organizer who attended that 2015 protest. Landau was beaten by police officers during a traffic stop in 2009.

He remembers the protest got out of control, and said the vandalism distracted from the message of drawing attention to people recently killed by police.

Thomas stands by his response today. “At the end of the day, that memorial does mean an awful lot to every different police officer. But it’s also just an object,” he said. “While seeing that hurt, I think that what would have hurt more is the damage that would have been done had we had some wild melee with the individuals that had done that.”

The police department’s choice not to intervene in the vandalism of the memorial drew anger from the Fraternal Order of Police and the Denver Police Protective Association, which called for the resignation of White and then-Director of Safety Stephanie O’Malley. Thomas said he remembers blow-back to his response coming from rank-andfile officers, which he expected.

But seven years later as patrol chief, in March 2022, Thomas would be tasked with speaking for the police department’s use of kinetic weapons and tear gas on protesters during the early days of Denver’s 2020 George Floyd protests. The city put him on the stand as its last witness in a civil trial for excessive force, in which a jury found the city responsible for the police response’s violation of protesters’ constitutional rights.

“Something that’s always top of mind for me is, this is a job that requires a tremendous amount of compassion, but also requires a lot of exposure to trauma,” said Richman. “And so what do fatigue and trauma do to a person’s ability to be fair-minded and empathetic in their work?”

But Thomas doesn’t see the police responses to the 2015 protest and the George Floyd protests as contradictory. People who vandalized property and threw things at officers put other people in harm’s way and seemed intent on destroying the city, he said.

“That’s what we were trying to stop. Could we have done a better job? Certainly. Was there a lot of emotion that was flowing during that event, particularly those first four days? Absolutely,” Thomas said. “But it was bigger than just us defending our building or our memorial. It was really, I think, defending the city and the place that people call home.”

Thomas has taken the job of Denver’s top cop amid questions about whether the city’s next mayor, whom voters will choose in the spring to replace term-limited Hancock, will appoint his or her own new police chief.

“It’s not what we need as a community at all,” Landau said. “I hope he intends to stay.”

Thomas confirmed his desire to remain the chief of police under the new mayor. Activists have expressed some wariness about him because of their disappointment with his predecessor’s tenure. But even the police department’s sharpest critics such as Landau and Calderón have said they appreciate Thomas’ visibility at community events and town halls, and his willingness to hear criticisms of policing without getting defensive.

“I tend not to judge people for things that they say and the way that they express themselves,” Thomas said, “because I understand that it’s their lived experience that causes them to think and feel that way.”

Reprinted from The Denver Gazette