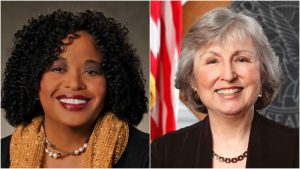 Two former Denver City Council members Elbra Wedgeworth and Jeanne Faatz have come out in staunch opposition of Denver ballot measures 2E and 2G, which are designed to strengthen the power of the city’s legislative branch.

Ballot Measure 2E is led by Councilwomen Amanda Sawyer and Candi CdeBaca and would give the 13-member council the authority to approve nearly a dozen mayoral cabinet appointees, along with the sheriff and fire and police chiefs. Measure 2G is carried by Councilwoman At Large Robin Kniech and would authorize the council to initiate a supplemental budget appropriation or transfer, with the mayor’s approval.

Wedgeworth and Faatz are co-chairs for Responsible Denver, a coalition of community leaders and organizations that argue the two ballot measures will limit Denver’s ability to meet city needs.

“I’m deeply concerned about the chaos that’s going to evolve,” Faatz said, adding that the measures were overly simplistic and failed to provide real solutions. “If members of the Council are debating each other about mayoral appointments or budget decisions, City Hall will be swarming with lobbyists who have their own ideas about both decisions. That is not how our city has or should operate.”

Wedgeworth called the ballot measures a “blatant power grab from members of City Council,” and a “solution in search of a problem.”

She and Faatz said that council members already have the tools they need to meet with the mayor about his decisions.

“They have to take the initiative to do that,” Faatz said. “That was how it was when I was in the Council and how it should work in the future, regardless of the people in those positions.”

Wedgeworth also expressed concerns that council members’ ability to change the budget mid-year would put members of the council “in competition for money and in competition with basic services.” Faatz said it could “destabilize the budget.”

Kniech has insisted that this change would not give council members “rogue power,” but rather be exercised in “rare” instances and only for major citywide priorities rather than any one council member’s “pet projects,” which was a concern of Faatz’s.

Kniech stressed the fact that, if approved, the new authority granted by the charter change would not only be used sparingly, but perhaps bring about even “more accountability” because it would require up to nine council members to agree on the spending proposal, rather than just one elected official (the mayor).

The overarching point, Kniech said, is for City Council to have the possibility to make a mid-year budget change, which is not currently allowed.

During the press conference Wednesday, Wedgeworth and Faatz also said that the mayoral appointments measure would deter prospective applicants form pursuing city leadership positions, which could hurt the city’s growth and development, a concern echoed by Mayor Michael Hancock’s office.

But Sawyer and CdeBaca aren’t convinced by that argument.

“If you can’t get seven members of a 13-member council to support someone who is going to be put in one of the top cabinet positions in the most powerful city in the state of Colorado,” Sawyer said in June, “then they shouldn’t be in that position in the first place.”