The State of the Streets: A conversation with Police… 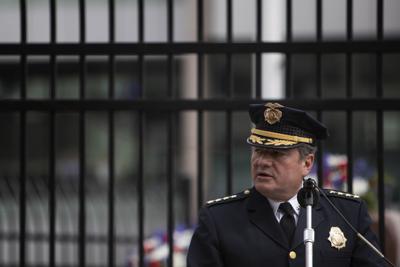 We all know about the State of the Union address our president delivers to Congress every year. Our governor does multiple State of the State speeches around Colorado, and Denver hosts several State of the City events, including one just last Thursday sponsored by the Denver Chamber of Commerce.

All fine and good, but who will tell us about the State of the Streets? What is the true state of crime in Denver? Or the state of police reform? Of homelessness? Of the flood of deadly drugs into Denver? Of addiction and mental illness? Gangs and illegal guns? Lawlessness at Union Station?

Welcome, then, to the first Colorado Conversation on the State of the Streets, hosted by the Colorado Politics and The Denver Gazette and featuring the one person at the center of all those storms – Denver Police Chief Paul Pazen.

Pazen and Denver Gazette Editor Vince Bzdek will hold a one-on-one Zoom conversation on Aug. 9, 2022 at 8 a.m. MDT to discuss the State of the Streets. You can ask your questions directly to the chief during this live-streamed event by registering at denvergazette.com/streets.

The central subject of the conversation: How can Denver cut down on crime and make our city safer?

Chief Pazen has been Denver’s loudest voice about the seriousness of the recent crime wave in Denver and what he believes are the reasons behind it. Though it started during the pandemic, Pazen believes it’s been aggravated by the courts.

“The lack of consequences and accountability for individuals who are committing crimes, these repeat and violent offenders, is why we are seeing these spikes” in crime rates, Pazen said in an editorial board meeting with The Denver Gazette recently.

Colorado’s average monthly crime rate in 2021 was 28% higher than it was a decade ago, a recent study found, and Colorado has the highest car theft rate in the country. The homicide rate in Denver in 2021 was the worst in three decades.

Arrests have soared as police try to keep up, Pazen said, “but there is a lack of follow through on the prosecution, adjudication, incarceration or supervision” of suspects.

“That’s where we need to really dig in and see what is going on,” he said.

In the last couple years, in the wake of the George Floyd death, the state of Colorado has moved to make its police departments much more accountable for their actions and more transparent in how they mete out justice. Pazen has been under a bright light during that time, and he has much to say about the state of police reform and the impact it has had on his department.

Pazen is outspoken about the need to crack down harder on the scourge of fentanyl that is ravaging Denver right now. Manufactured in China, packaged in Mexico and smuggled into the U.S., lethal fentanyl is killing Colorado kids at a record rate.

Pazen is also vocal about the millions being spent on homelessness that he believes are in some cases only sustaining the problem, not solving it.

So, what are the answers to these seemingly intractable issues? Pazen is not afraid to offer solutions.

In an election year like this, law and order is at the forefront of political conversation, and Pazen promises to take the hardest issues head on.

The chief also will zero in on practical steps communities, families and individuals in Denver can take to make their communities safer, and what the police are doing to help.

Join the conversation Tuesday and take the first step toward becoming part of the solution.

By Vince Bzdek vince.bzdek@gazette.com
Aug 7, 2022
Reprinted from The State of the Streets: A conversation with Police Chief Pazen | Police & Public Safety | denvergazette.com