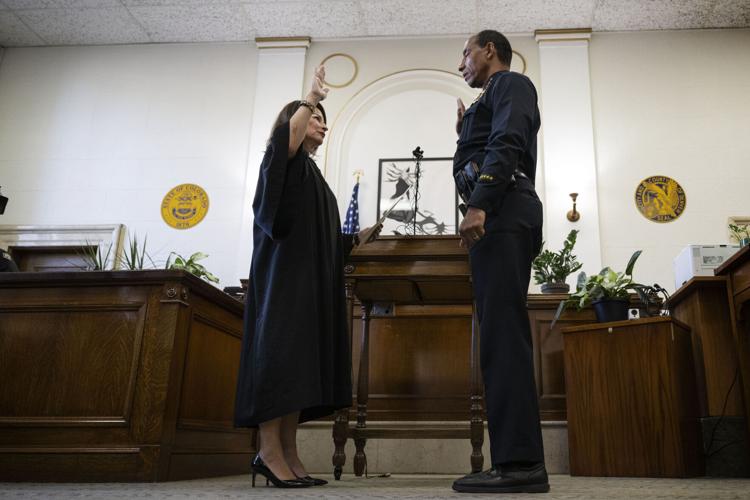 Denver has a new top cop — at least until the mayor’s administration changes next year.

He takes on the department as it grapples with a shortage of nearly 200 officers, increased response times to calls and a rash of lawsuits over excessive-force incidents.

Thomas replaces Paul Pazen, who officially stepped down as chief Oct. 15. He most recently was the police the department’s patrol division chief, and previously served as commander of patrol Districts Two and Five and the Internal Affairs Bureau.

A graduate of Thomas Jefferson High School, Thomas came to the department in 1989.

Hancock announced Thomas as his pick for Denver’s next chief when the news of Pazen’s retirement broke at the end of summer. Thomas takes the job amid questions about whether Denver’s next mayor, whom voters will choose in less than a year, will appoint a new police chief.

Thomas said he will prioritize addressing crime, reducing response times and addressing the current officer shortage by redistributing resources where possible to free up patrol officers. The department uses resources such as crash or property report technicians as alternatives to armed officers in low-level situations. Additionally, the city’s Department of Public Health and Environment operates the Support Team Assisted Response (STAR) program, which sends pairs of mental health clinicians and paramedics to nonviolent situations for which a behavioral health response is appropriate.

“I want every individual who lives in the city to understand that the Denver Police Department works for them,” Thomas said.

Police departments often make the mistake of assuming they know what the residents they serve need, Thomas said, and that understanding what residents want is key to building trust between the department and community.

“In reality, I think we can learn a lot from listening to the community.”