Det. Curt Holland and a civilian were killed in the three-vehicle crash

According to the State Patrol, the incident happened as follows: A Ford F350 headed south on Colorado 2 traveled off the right side of the road and onto the shoulder before returning to the roadway. Then it collided with an unmarked Commerce City Police Department Ford Explorer and a Kia Soul that were northbound. The F350 struck the Explorer head-on and collided with with the driver’s side of the Kia.

Fructoso Rosales-Cano, 45, the driver of the F350 was transported to the University of Colorado Hospital with life-threatening injuries. Alcohol and excessive speed are being investigated as contributing factors in the crash.

The crash happened in the area of Colorado 2 and Turnberry Parkway, which is in Commerce City. The State Patrol responded because a police officer was involved in the crash. 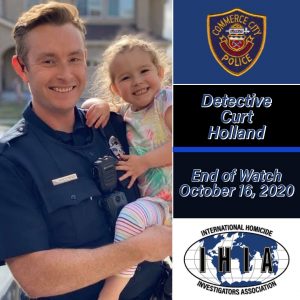 We honor Detective Curt Holland who was struck and killed by a drunk driver. He is survived by his wife and two children. We pray for his family, friends, City Government of Commerce City and community during this time. Rest easy hero, we have watch from here.

Reprinted from Police One at https://www.police1.com/officer-down/lodd-colo-leo-killed-in-head-on-crash-by-suspected-drunk-driver-erGqTmtxXvRliSOB/