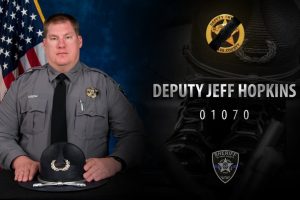 Deputy Jeff Hopkins was diagnosed with the disease just one day before his death.

Hopkins last assignment was as an intake and release deputy at the El Paso County Jail, and the Sheriff’s Office is now investigating to determine his contacts in the days before he fell ill. About 40 deputies and 30 civilians work at the jail, and there are currently just over 1,100 inmates.

“He was an exceptional employee,” Elder said. “He was always committed to the mission and the vision of the Sheriff’s office and he’ll be missed.”

Gov. Jared Polis offered condolences to Hopkins’s family and said his death is a reminder of the seriousness of the virus.

“Deputy Hopkins spent his life serving his community and working to make our state a better place,” Polis said in a written statement. “Each tragic death from Coronavirus is a stark reminder of why we need to stay at home. We can’t thank our first responders and law enforcement enough for serving on the front lines, demonstrating in this crisis and every day their dedication and sacrifice.”

Elder said Hopkins, who has been with the department since 2001, had been feeling ill for about a week before his death. He left early on his last shift on March 25 due to his symptoms, following Sheriff Office’s policy. County health officials said they were unaware of any underlying health conditions he may have had.

County health officials said the Sheriff’s Office has been meeting or exceeding guidelines from the Centers for Disease Control in regards to protecting deputies, inmates and arrestees from the coronavirus. Sheriff Elder said aggressive disinfecting of the jail and patrol cars began as early as March 15.

“We’re down to the point now where everybody that comes in any one of our buildings, we take their temperature and ask them strategic questions to try and stop the spread of this virus,” Elder said.

Prisons and jails have been the focus of considerable concern as the highly contagious coronavirus moves through Colorado. Some jails have chosen to make early releases to reduce populations allowing inmates to be farther apart, and most have enhanced cleaning and disinfecting procedures to prevent spread of the virus in the enclosed areas.

Still, in addition to the outbreak in the El Paso Sheriff’s Office, the Weld Sheriff’s office has had four deputies diagnosed with COVID-19, along with one inmate in the county jail. Three of the deputies worked at the jail, and the fourth on patrol. All are recovering at their homes.

The Weld inmate was isolated and is now hospitalized, and all Weld detention deputies have altered shifts so they are with the same inmates each day rather than rotating through the facility.