Due to COVID-19, Colo. judge declares mistrial in slaying… 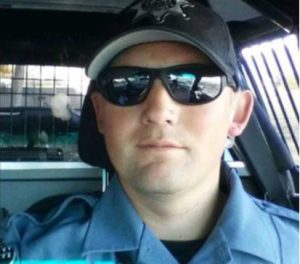 Deputy Heath Gumm was shot in the line of duty in 2018. His killer’s trial ended in a mistrial partially due to COVID-19. (Photo/Adams County Sheriff’s Office)

ADAMS COUNTY, Colo. — The stalled trial for a man accused of killing an Adams County Sheriff’s deputy ended in a mistrial Monday due in part to the novel coronavirus pandemic.

Adams County District Court Judge Mark Warner issued the written ruling Monday in the case of Dreion Dearing, who is charged with shooting Deputy Heath Gumm during a chase in 2018.

“The current pandemic and the resulting preventative measures impact the public’s access to this trial, affect the jury pool and create prejudice and fear in prospective jurors forced to come into the courthouse,” Warner wrote.

The judge quoted more than a dozen emails from prospective jurors who sought to be excused from jury duty because of sickness, fear of exposure, childcare requirements because of closed schools, age or other risk factors for contracting the virus and financial hardship due to job loss because of the pandemic.

Warner wrote that some prospective jurors “broke down and cried” while filling out their jury questionnaires because of their fear of COVID-19, and he said the court did not have a “reasonable method to adequately protect” prospective jurors in the courthouse.

“Continuing the trial at this time, in these circumstances, would create a substantial and real prejudice in prospective jurors and affect the administration of honest, fair, even-handed justice,” Warner wrote.

The removal of the death penalty option after jury selection had started also pushed Warner to declare a mistrial. Prospective jurors went through extra steps and received additional information about the death penalty, which is no longer relevant, Warner wrote.

Warner also noted the increased media coverage of the Dearing case in light of both the pandemic and the removal of the death penalty. He wrote that he censured one reporter from the Colorado Independent for “taking photographs on her phone in the courtroom,” and he said Denver Post coverage of the potential safety threat to jurors could have exacerbated the prejudice for prospective jurors.

“Though media coverage alone does not persuade the Court that a mistrial is warranted, it represents one of many coalescing events that adds to the Court’s decisions to declare a mistrial,” Warner wrote.

A spokeswoman for the Colorado State Public Defender’s office, which is representing Dearing, did not immediately return a request for comment Tuesday.