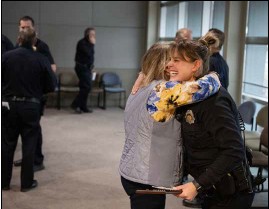 When Officer Melissa Martin responded to a noise complaint on a snowy New Year’s Eve in 2021, it turned into a welfare check, and Martin learned the woman she encountered had just escaped an abusive relationship. Based on the apartment’s sparse furnishings, it appeared she had just moved in.

Martin formed a connection with the woman when she learned the woman and Martin’s family were both from Holyoke, a small town in northeast Colorado near Nebraska. The woman told Martin she was struggling with mental illness and substance abuse, and said she hadn’t eaten in four or five days. Martin found her refrigerator empty, and decided to go to King Soopers and buy the woman groceries for the week with her own money.

Martin said the solution to improving the woman’s situation by buying her food seemed easy. She added the woman was older, and made her think if what she would want someone to do if one of her own parents was in a similar situation.

“I try really hard not to judge just try to help them in the situation that they find themselves,” she said. “If the world would just treat people like they would like be treated, how much of a difference might that make?”

CAP board member and municipal judge Mark Pautler joked at Wednesday’s ceremony that Martin’s “nosy” nature led her to probe into the woman’s situation and find out what she was going through.

“It’s that kind of nosiness if you will, that kind of inquiry, that kind of care about other human beings that really makes a difference,” said Pautler, who is also a CAP board member.

Martin said it’s meaningful to get recognition from an organization outside the police department.

“It’s a contentious time right now for everyone. The world is really heavy. It just is really nice that we’re able to take a break from it and recognize that people are still people,” she said.