Doug Friednash: Democrats, ignore the crime wave at your… 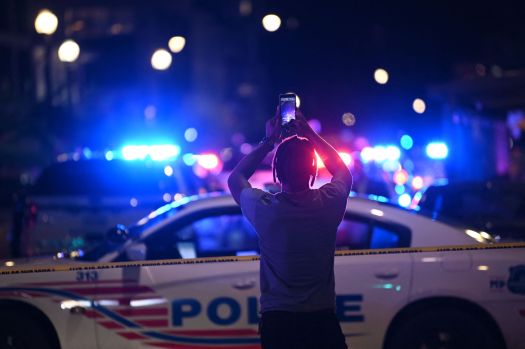 A man uses his phone in front of police cars blocking a street after a shooting at a restaurant in Washington, DC, on July 22, 2021.

Democrats, reading the tea leaves from Tuesday’s election, would be wise to make public safety one of their highest priorities.

Many neighborhoods have become unsafe and Americans want action.

Republicans like Virginia’s new governor, Glenn Youngkin, have seized this issue. Youngkin ran a series of ads attacking Democrat Terry McAuliffe’s stances on public safety before his unexpected win Tuesday. In the 2022 midterms, Republicans will try to paint a collective national image that Democrats are soft on crime.

Here are the cold facts. America’s murder rate rose 30% in 2020, according to data published last month by the Centers for Disease Control. The conclusion was consistent with the FBI’s data released the prior month. This staggering increase was the largest single-year increase in more than a century, and possibly ever. Overall, the FBI data showed that violent crime has risen by 5.6%.

Colorado data released by the Colorado Bureau of Investigations earlier this year showed Colorado having a 29% increase in homicides, 6.5% increase in violent crime, and an 18% increase in aggravated assaults.

Locally, a month-long investigation by Shaun Boyd and CBS4 that aired this past week found thousands of defendants in felony cases were released within days or hours of their arrest without paying any bond with many of these defendants being re-arrested later for worse crimes. The investigation showed Denver County Court judges requiring no bond, or $1 bonds to people accused of violent crimes with long criminal histories.

Denver Police Chief Paul Pazan warned us months ago that his officers were arresting a record number of armed felons, but said the courts were releasing them with low or no bonds. Pazan thought outside of the box and formed a partnership with federal agents so that some of the cases could be heard in federal courts instead.

Advocating for defunding the police, significantly reducing their budgets, or reallocating resources of police departments away from critical public safety needs, is a recipe for political disaster.

Successful mayoral candidates across the country, like Democrat Eric Adams, who is New York’s new mayor and former New York police captain, made investing in the police and fighting crime an essential part of his campaign.

A Pew Research Center study released last week shows the public’s attitudes shifting on police funding.  The percentage of adults who say spending on policing in their area should be increased now stands at 47%, a 16 percentage point increase from June 2020. That percentage includes 21% who say funding for their local police should be increased a lot, up from 11% who said this last summer. On the flip side, only 15% want decreased police funding, down from 25%.

In Pew’s July survey, 61% of adults said violent crime was a very big problem, an increase from 48% in April.  The July survey showed that Americans were more concerned about violent crime than the federal budget, climate change, economic inequality and illegal immigration.

Colorado has shown that police reform and public safety investments are not a zero-sum game. Colorado should be proud of the landmark police accountability legislation they passed in the wake of George Floyd’s murder and the other measures they are taking to provide a helping hand where needed. Colorado is one of the very few states to meaningfully address this issue.

Democrats should also advocate for appropriate bail and bond policies and yes, properly punishing violent criminals and repeat offenders too…even if that means we have to put more people behind bars and for longer periods of time.

Democrats who ignore this issue, do so at their own political peril.

— Doug Friednash is a Denver native, a partner with the law firm Brownstein Hyatt Farber and Schreck, and the former chief of staff for Gov. John Hickenlooper.