The silver Lexus sedan pulled up just before 7 a.m. Tuesday.

Two people got out, looked underneath Kym Bloom‘s Toyota Prius parked outside her Capitol Hill apartment building and then drove off, surveillance video shows. Ten minutes later, they returned and, in broad daylight, sawed out the Prius’s catalytic converter before pulling away.

Bloom discovered the theft of the pollution-control device a little bit later when she turned on the 14-year-old car and the roaring noise from the damaged vehicle startled her.

“I never thought I’d have to lock up the bottom of my car,” she said.

Bloom is one of the thousands of people in Denver who’ve lost car parts, clothes, bicycles, tools, vehicles and irreplaceable items during an increase in property crime in 2020 that is not showing signs of slowing. Denver saw significant increases in most types of property crime in 2020. In comparison to the average of the previous four years, burglaries rose 23% in 2020, larceny rose 9%, auto theft rose 61% and theft from cars rose 39%, Denver police data shows.

The four crimes dropped in February when the pandemic was first announced and then rose month-over-month throughout 2020, the data shows.

“I would use the word ‘surge’ or ‘skyrocket’ to describe the increase in property crimes in Denver,” Denver police Chief Paul Pazen said. 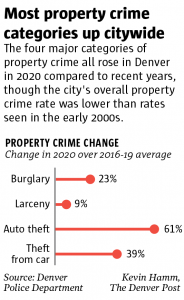 The increases buck the trends seen in other large U.S. cities during 2020. An analysis of crime in 34 cities showed that rates of burglaries and thefts fell on average, according to the report written for the National Commission for COVID-19 and Criminal Justice. Motor vehicle theft rates, however, rose about 13% across the sample.

Some incidents cross multiple categories. Thieves broken into two of Megan Kolli‘s cars that were parked in front of her West Highlands house over Thanksgiving weekend. The thieves found a garage opener in one of the vehicles and returned a few hours later with an SUV to steal from the garage. Video captured the thieves pull up to the garage and piling stuff into their vehicle.

Kolli estimated the loss of tools, furniture and damage to three cars totaled more than $5,000. Most of the stolen goods were replaceable, but the thieves also took the one-of-a-kind saris Kolli and her husband wore at their wedding. It also broke their sense of safety in the neighborhood, she said.

Kolli said she is empathetic to the fact that people in need might steal to get by. But the thieves that stole from her garage left a freezer full of food untouched, she said. They also left behind the tool they used to break into her cars and trash, like mail, that seemed to be from other properties they had targeted.

“They didn’t seem too concerned about getting caught or facing consequences,” Kolli said.

“People don’t want to burglarize houses if someone is present,” said David Pyrooz, an associate professor of sociology at the University of Colorado Boulder who studies crime.

But business burglaries skyrocketed as many businesses closed or reduced staffing intermittently throughout the pandemic. Denver police received 1,942 reports of burglaries of businesses in 2020 — a 55% increase over the average of 1,249 the previous four years.

Tami Door, president and CEO of the Downtown Denver Partnership, said the statistics about the downtown area are reflective of crime trends across the city, though downtown also saw massive racial justice protests over the summer. Some people in the protest crowd were arrested on suspicion of burglary and other property crimes. 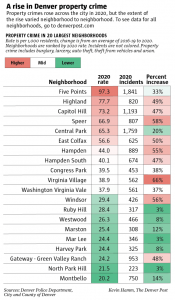 Door said the downtown partnership’s security strategy has had a positive effect on the area and that the partnership plans to add more security guards in May.

“A big crime deterrent mechanism is actually more people,” Door said. “So when you have fewer people in a given environment, we have fewer eyes and ears on a place.”

While some are becoming first-time victims of property crime, others said their experience in 2020 isn’t much different than other years.

Daphne, who spoke to The Denver Post on the condition her last name not be used because she feared repercussions, has lived in a Denver Housing Authority apartment in the Sunnyside neighborhood since 2017 and said every year she’s been the victim of property crime.

A thief stolen her license plates in 2018. In 2019, someone seriously damaged the front of her car. In October 2020, people shot her apartment and car with paintballs, which caused damage. In February, someone tried and failed to steal her license plates again, though they damaged her new car in the attempt.

She asked the housing authority to move her family — which includes her husband and their 5-year-old daughter — to a new location, but they have denied her requests, she said.

“We’re scared to live in this place,” she said.

It’s unclear what effect the economic recession caused by COVID-19 and the loss of thousands of jobs has had on the increase in property crime, experts have said. A review of research conducted by researchers for the U.S. Congress in 2011 about the impact of the 2008 recession on property crime found a lack of consensus on correlation between the two.

Pazen pinned part of the increase in property crime on policy changes in the courts and the jail aimed at keeping the jail population low to mitigate the risk of COVID-19 in the facility. The changes mean that more people are being ticketed, instead of arrested, on suspected crimes and that more suspects are receiving low-cost or no-cost bonds.

“We continue to arrest folks for property crimes and there’s no accountability,” Pazen said. “They’re out of jail on (personal recognizance) bonds often times before we even finish the paperwork.”

CU’s Pyrooz said his analysis of Denver’s crime in 2020 showed that a drop in police proactivity coupled with the loss of trust in police as well as the entire criminal legal system after nationwide protests of the killing of George Floyd by Minneapolis police contributed to property crime here. While property crime rates rose slightly between the onset of COVID-19 and the killing of Floyd, they surged after the protest movement, he said.

And the increase in property crimes in Denver shows no signs of slowing, Pazen said. Property crimes across the city are up 70% in the first 10 weeks of 2021 compared to the average of that timeframe in 2018, 2019 and 2020. He encouraged people to remove valuables from cars, use anti-theft tools like steering wheel locks and to form neighborhood watch groups to report suspicious behavior.

“Crime is still trending in the wrong direction,” he said.