DENVER (KDVR) — The Denver Police Department is still investigating a 47-year-old cold case involving a Colorado state trooper who was found shot and killed in his patrol car.

On Dec. 27, 1973, Thomas “Tom” Carpenter was seen around 9 a.m. on the westbound on-ramp from Broadway to the Boulder Turnpike.

It was reported that he was there with a vehicle and two men – a white man and a black man. The vehicle was later determined to be stolen. A short time later there were reports that Carpenter was seen driving his patrol vehicle, with two men in it, as it travelled around I-25 and I-70.

Then at 10:50 a.m., witnesses reported seeing a white male and black male running from the direction of the patrol car at 13870 Albrook Drive. Trooper Carpenter was found deceased inside his patrol car, in the driver seat, having been shot from someone in the back seat. 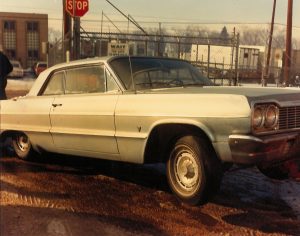 Denver Police began investigating the homicide and the FBI started a parallel investigation. Parties were questioned, but no arrests were made. Two years later, Carpenter’s gun was found in a ditch in New Mexico, but this discovery did not lead to any arrests.

“Thomas Carpenter was a devoted husband, father, and trooper,” said Colonel Matthew Packard, Chief of the Colorado State Patrol, in a media statement. “Someone must know something about the murder of Trooper Carpenter. We are pleading that anyone with information, even if it seems insignificant, to please call the Denver Police so that the family can receive closure in this case.”

Carpenter graduated from Colorado State Patrol academy in 1968, after serving in the U.S. Marine Corps. He was 31 when he was killed, married and was a father to three kids under 10 years-of-age. He was described as a kind, calm, religious man, who was quick to help someone in need.

In 2012, the case was reviewed by DPD investigators and then in 2018, the case was reopened and assigned to a cold-case detective who continues to investigate this homicide. Additionally, the Denver Police Crime Laboratory has made the case a priority and is working to review all evidence in the case.

“While nearly 50 years have passed since this tragic murder, we are hopeful that the case can be solved through new community tips and by re-examining the evidence from a modern perspective,” said Denver Police Chief Paul M. Pazen, in a media statement. “This case, along with other cold homicide cases, receive an in-depth analysis by our dedicated Cold Case Unit. This unit’s goals, while working with our Crime Laboratory, are to bring resolution to cold cases and ensure those who committed the crimes are held accountable.”