Denver police are fed up with the DA releasing… 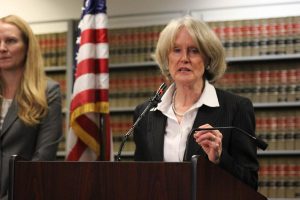 Denver District Attorney Beth McCann paid $237,000 in settlement and severance payments over the last year and a half to three employees./Alayna Alvarez, Colorado Politics

Ask a cop in Denver why crime rates are going up so much these days, which I have been doing a lot lately, and most of them will tell you one of the biggest reasons is that DA Beth McCann is releasing too many suspects they arrest back out on the streets on personal recognizance bonds.

“PR bonds” require no money or property from suspects, only their signature and promise to appear in court at a future date. One cop told me that the DA is “giving out pr bonds like she is giving out water.”

And Denver’s police officers are frustrated beyond words.

That frustration finally boiled over last week for both Mayor Michael Hancock and his deputy mayor and director of public safety, Murphy Robinson.

It boiled over for the mayor in his annual state of the city address.

“I believe in law enforcement reform, I believe in judicial reform, but we cannot over-correct to where we are allowing violent criminals to come out and continue to reoffend without a system holding them accountable,” Hancock said. “There must be a balance between reform that keeps low-level non-violent folks from going to jail in the first place, and our residents’ safety.”

In an interview afterwards with Denver Gazette reporter Hannah Metzger, he hammered his point home. “We simply need to keep people safe and there’s no excuse for releasing a violent criminal when we know they have a propensity to commit violent crimes.”

Robinson gave even greater voice to police frustration with the DA’s office in an extraordinary meeting of the City Council safety committee on Wednesday after the speech.

Amanda Sawyer, City Council representative for District 5, which stretches from Colorado Boulevard east to the Aurora border and from Colfax Avenue south to Tennessee and Mississippi Avenues, told Robinson she has been hearing a lot from officers and community members in her district. They have been complaining to her about “state policies that have happened that are affecting community safety in general, like for example releasing repeat offenders on pr bonds.”

She said such releases are causing an extraordinary amount of frustration for the officers who feel like they are doing a great job and then they have to go do it again. “And then the people who live in our communities are wondering why it is that someone who has been arrested is being put back out on the street,” Sawyer added. “How are those state decisions informing the kinds of decisions you are all making?” she asked Robinson.

Robinson took the question as an opportunity to launch a blunt, passionate cri de coeur for the city’s beleaguered police officers.

“This is another hot topic that I have been dealing with for frankly months,” Robinson said. “Yes, when COVID first hit, it was me who said let’s look at our jail population and let’s release those folks who have low-level offenses. We did so, we didn’t see anything wrong with that.

“And then, once COVID leveled off, I reversed that and said now let’s put people in jail who need to be in jail.”

Robinson said that original change in policy has carried an unintended consequence on the state’s side and the district attorney’s office side.

While the mayor pointed a finger more generally at state laws that have led to too many releases of violent criminals, Robinson pointed a finger directly at the DA’s office and Denver’s judges.

He has had multiple meetings with the district attorney and judicial staff because he said police are finding that the flood of recent pr bonds are having the unintended consequence of allowing a flood of “reoffenses, and sometimes the reoffenses are worse than the original offense. We’re seeing this over and over and over again.”

“We always seek to partner with our district attorney’s office, we always seek to partner with our judicial system and all the other partners in the criminal justice system,” Robinson said. “However, I am imploring that they continue to take another look at how they’re doing business because we cannot keep doing this. Having violent crime, having property crime … up so bad that we are seeing the unintended consequences of those policies and frankly how the criminal justice system doesn’t work when you don’t have everything balanced.”

The situation now is not only dangerous for Denverites, it’s also become an enormous morale issue for the police department.

“When officers are risking their lives, to charge people, to making sure they’re enforcing the law, and then all of a sudden, that person gets off with a pr bond and/or is never to be seen again and/or just goes back and does something worse, how do you tell a police officer, ‘Continue the good fight? Continue to make sure that you are doing your job every day enforcing the law?’ It’s tough.”

Policing a major city in the United States in this day and age is already tough enough, and last year really proved to be one of the tougher years ever for law enforcement.

Denver police have had record numbers of retirements and multiple people resign, and Robinson is having enormous difficulties right now recruiting new officers.

“It has been a rough few months for us,” Robinson told the council members. “The officers have to pick up the slack, do the overtime, to do what they are called on to do.

“We’re looking at really how do we make this profession desirable again. Because frankly the national rhetoric across the board has made this a very undesirable place to work.”

Robinson isn’t saying there isn’t a need for more police accountability, but he worries the pendulum has swung too far against police right now, and cops are damn sick of it.

“It’s a balance because I think there is a lot of transformation that needs to happen. There are a lot things that need to occur to make sure we hold people accountable. But we also have to be sure we’re not making villains of people who go to work every day and do a fantastic job and handle thousands and thousands of calls that you’ll never hear about.”

Police are already under siege, in other words. The last thing they need is a district attorney who is working against them rather than with them.