Bring cops back to Denver’s schools/The Gazette Editorial Board 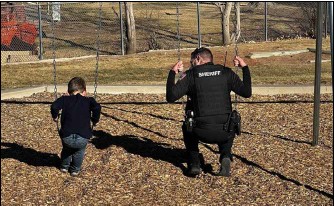 Arapahoe County Sheriff’s Deputy Travis Jones lifts the spirits of a student having a rough day at Peabody Elementary School in Centennial, where Jones serves as a school resource officer.

Cops who serve on Colorado’s K-12 campuses have been nothing short of heroes. They have saved students’ lives — literally — and also have changed their lives for the better. They have developed into friends and mentors for the kids. They have set examples for them and mediated differences among them. They have bridged a gap at some schools between law enforcement and the surrounding community.

But no longer in Denver. In one of its hyperpolitical lurches, the Denver Public Schools Board of Education voted in 2020 to kick out its 18 campus cops at the beginning of this school year. As with the board’s other lapses in judgment, it’s the kids who have lost out.

Just last November, in the terrifying wake of a shooting in Aurora that left six teenagers wounded at a park near Aurora Central High School, a school resource officer assigned to that campus rushed to the scene. Aurora Police Chief Vanessa Wilson later told The Gazette the officer responded to the shooting and applied a “life-saving” tourniquet to the victim.

Earlier last year after the tragic shooting death of an Arvada police officer while temporarily on street patrol, The Gazette reported the officer’s regular assignment had been as a longtime school resource officer at Arvada’s Oberon Middle School. He was beloved by students, faculty and parents for helping youths who got in trouble or who just needed a friend.

All of which has gone missing in Denver. The Gazette recently reported on a breach of security at Denver’s Centennial Elementary School — an intruder upset at the school’s Black Lives Matter curriculum had wandered in. It was an unsettling experience for the school staff that could have been much more swiftly resolved had a school resource officer been on hand.

In many Colorado school districts, in fact, school resource officers protect and serve our children in wide-ranging and remarkable ways. That’s over and above providing basic campus security — a key consideration in its own right.

Why not in Denver? The board evidently would rather blow kisses to the political fringe than mind the safety of its own students. The vote to expel Denver police officers supposedly was intended to shut off the so-called school-to-prison pipeline. The preposterous premise was that kids of color who interact with cops are likelier to wind up behind bars.

What the DPS board didn’t consider — or perhaps bother to learn — was that 17 of the 18 officers assigned to district campuses were themselves people of color. We learned that recently in a conversation with Denver Police Chief Paul Pazen, who is Hispanic and graduated from North High School. He noted many of the ousted resource officers had grown up in the neighborhoods in which they served and had attended the schools where they were stationed.

That’s another strength of having cops on campus: They not only can lure kids away from a life of crime but also in some cases can inspire them to take up a career in law enforcement.

As crime surges throughout the metro area — and on DPS campuses, too, as we noted here earlier this school year — Denver’s schools need their dedicated resource officers more than ever. Could this school board ever set aside politics long enough to invite them back?